Portrait of My Mother

After my grandfather died, my aunt and uncle, who lived down the gravel lane from me, purchased my grandparents' house from the family trust.  My aunt and uncle moved out of their farmhouse (which was originally my great-grandparents' farmhouse--are you confused yet?!) and their son and his wife moved into the farmhouse.  In other words: there was some house-shuffling here on the farm last year.

My aunt and uncle had an enormous amount of work to do sorting through the 80 years' worth of stuff that my grandparents owned.  Because I am the oldest grandchild, a girl, and live on the farm, and also because I am well-known for my sentimentality, I've gotten some special things over the past few years.

This photograph of my mother was in her former bedroom at my grandparents' house. This was taken when she was just out of college, I believe.  A freshly-minted young lady with a degree from Mary Washington College in Virginia.  She had that same beautiful smile her whole life.

When I looked at the photograph closely, I could see that she was wearing a little twisted gold and emerald ring (her birthstone), which I still own today.  It's barely visible in this photo; I had to look very closely to identify it.  But that's the one that sits in my jewelry box to this day! 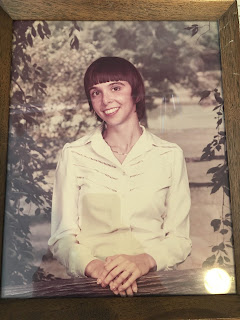 I passed this along to my sister, so she'd have this luminous beauty looking over her each day.
My mother had more grit, grace, optimism, openness, positivity, and straight-up joie de vivre than anyone I've ever met in my life. Twenty years gone. I wish everyone could have known her.
Posted by Polly at 1:48 PM

Email ThisBlogThis!Share to TwitterShare to FacebookShare to Pinterest
Labels: Musings

Polly
I look for the beauty and wonder in everyday life. My husband, son (Finn, age 12) and daughter (Annie, age 9) and I live on my family's farm. I am a Christian, and I love reading books, creating things and keeping house. I am also a poet and attorney.

All text and photographs are subject to copyright and are my sole property. No text or photos may be used without my prior express written consent. You may link to this site or pin from it, but please give credit to the original source.